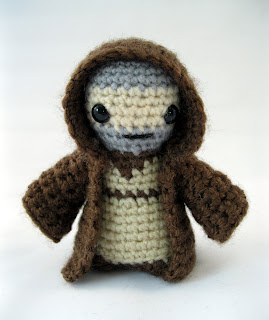 I've just finished my latest Star Wars amigurumi figure - Obi-Wan Kenobi. So far I've only done characters from the Original Trilogy, so I made a little mini version of old Ben Kenobi, complete with a brown hooded robe. 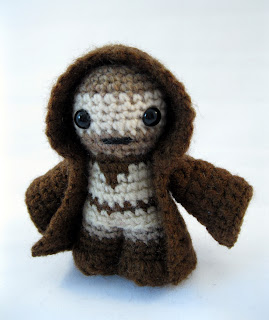 I'd forgotten, until I rewatched Episode IV, quite how much I liked the character, but Sir Alec Guinness did a great job, bringing a lot of class and gravity to the whole film, and he gets some great lines. When Ewan McGregor was cast in the prequels I was pleased, as he's a decent actor (who's very easy on the eye!), and he did a good impression of Guinness which helped connect the new films to the old. With that in mind, I thought I'd make his version of the character too. The pattern is written with just a few variations - old Obi-Wan wears a long robe whereas young Obi-Wan has a shorter one so you can see his trousers and boots, and obviously the hair colour is different. 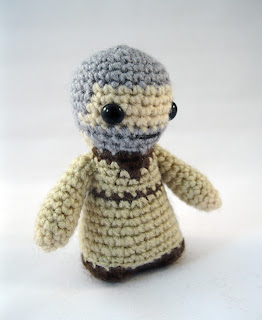 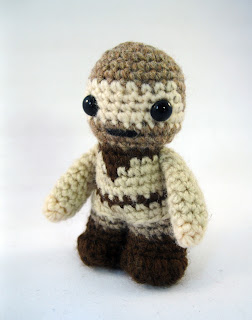 I was very pleased with how the hooded robe turned out. Nearly all the crochet I do these days is amigurumi in the round, so it was a bit different making something in rows. I was worried that something so small would end up far too stiff, but it worked just fine. I might even try making a version of Yoda from the prequels with a little hooded robe. 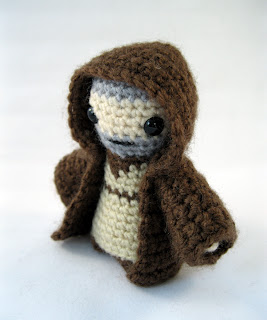 The pattern, including both versions of Obi-Wan, is now available in my Etsy shop.
Posted by LucyRavenscar at 17:38 10 comments: