I've been very busy working on my next Star Wars pattern book, so I haven't got many new projects to share. However, before I got started on the book I made a crochet blanket just for myself. Having finally got myself on Pinterest I'd discovered and pinned all sorts of lovely patterns, and I decided to make something fairly simple but colourful. I got inspiration from The Patchwork Heart and used the colour pack for this blanket to work out how much yarn I'd need. 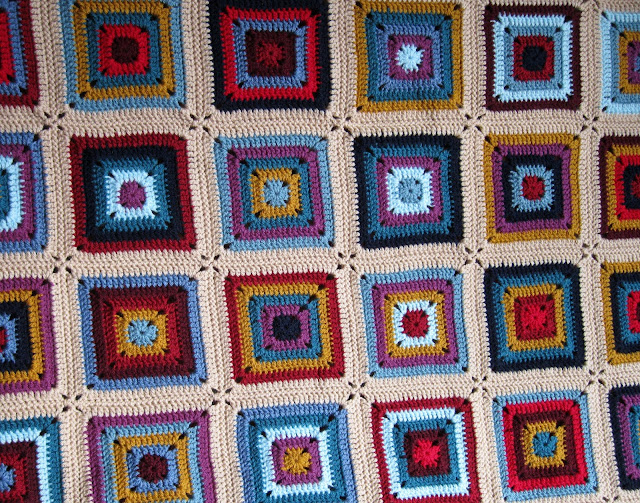 I wanted this blanket to go in my bedroom, so I chose the colours to match a wallhanging that we have above the bed. I must admit, I decided on a range of blues and reds, but when some of them weren't in stock, I chose some alternatives that I slightly regretted (the purple in particular), but I was impatient to get on with it! 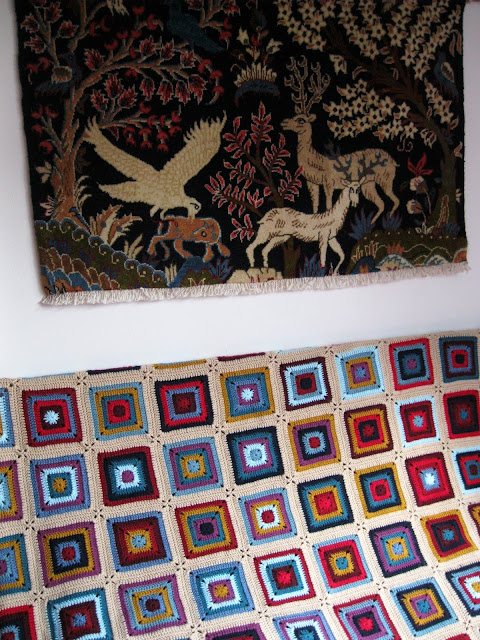 The basic pattern for the squares is very simple, I tweaked the pattern a little after looking in an old motif book that I have, but it's a very common square that you'll come across everywhere. I worked all the first rounds, then all the second rounds, and so on, and in fact, it felt like it worked up quite quickly, though I didn't work out exactly how long I spent on it. It was nice to work in separate motifs as I started on it when the weather was still quite warm, and I didn't fancy sitting under an increasingly large blanket!

The amount of yarn I'd bought (ten 100g balls of Stylecraft Special DK in different colours - Lipstick, Burgundy, Gold, Claret, Midnight, Sherbet, Teal, Denim, Storm Blue, Plum - and four balls in Stone for the outside of each square and joining) was supposed to be enought for a blanket 8 by 8 squares, but I found I only used about half of the colours before the last round once I'd made 64 squares. I wasn't sure how much of the joining yarn I was going to use, so I ended up making 90 squares, and the four balls of the Stone were just enough to make the final rounds and join all the squares for a blanket that size. 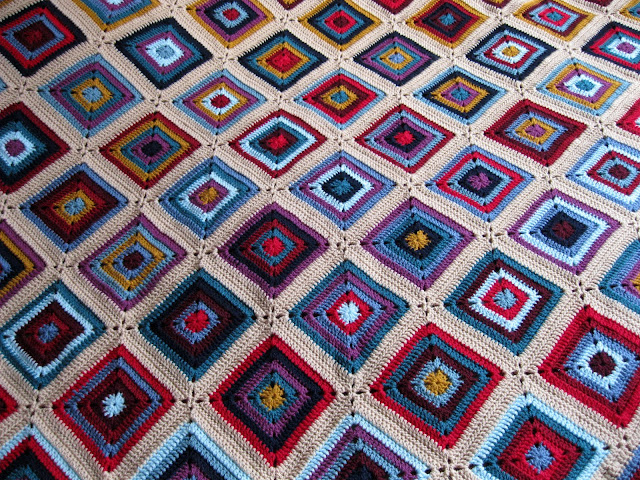 I joined the squares using sc(US)/dc(UK) through the edge of two squares at a time, it's a quick way to join and is very neat, smooth on the front and giving a ridge on the back of the blanket, which you can see in the photo below. I do like the way that the holes on each corner of each round make a pattern when the squares are all joined together. 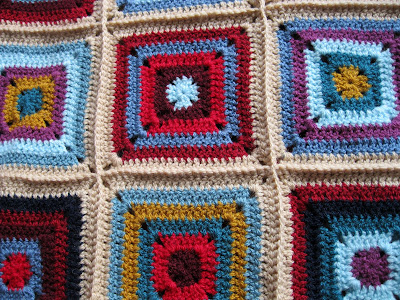 I'm very happy with my blanket, which is just for me, even though the colours don't work as well as I'd wanted. I use it on my bed as an extra layer if it's very cold (my husband doesn't really feel the cold, so it only needs to be large enough to go on my side of the bed). It's also good for napping under when it's not so cold, and as I fold it up when I'm not using it, it hasn't got covered in cat or dog hairs!
Posted by LucyRavenscar at 00:57 2 comments: