I have just completed my latest Star Wars characters in crochet form; Jabba the Hutt, Salacious Crumb and Slave Leia; and the patterns are now available in my Etsy shop. 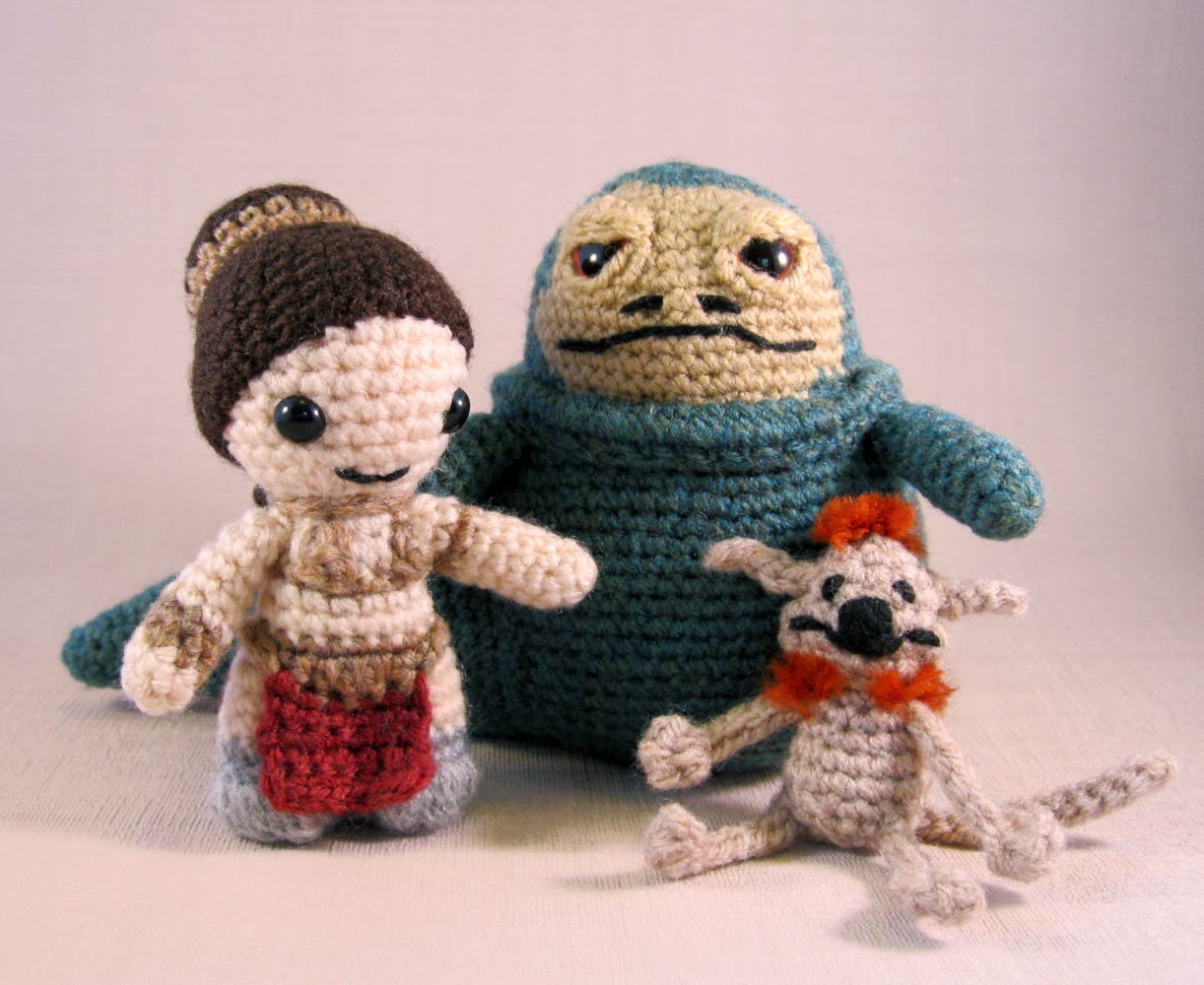 I've been meaning to design more Star Wars crochet patterns for a while now, although I always have a very long list of different patterns I want to create. However, last autumn I decided to start working on some new Star Wars characters. I had quite a few requests for Jabba the Hutt, so he seemed the obvious place to begin. He presented a different challenge to most of the other characters - generally I'm trying to simplify a fairly detailed character so that they're cute but still recognisable. Jabba is already quite a simple shape without much detail, and it's hard to consider him cute in any way! I also had to think about what size he should be; the other figures are not in an exact scale with one another, but Yoda is smaller than the human characters and Chewbacca is larger than all of them. I didn't want to make him too big, but he had to be bigger than the others. 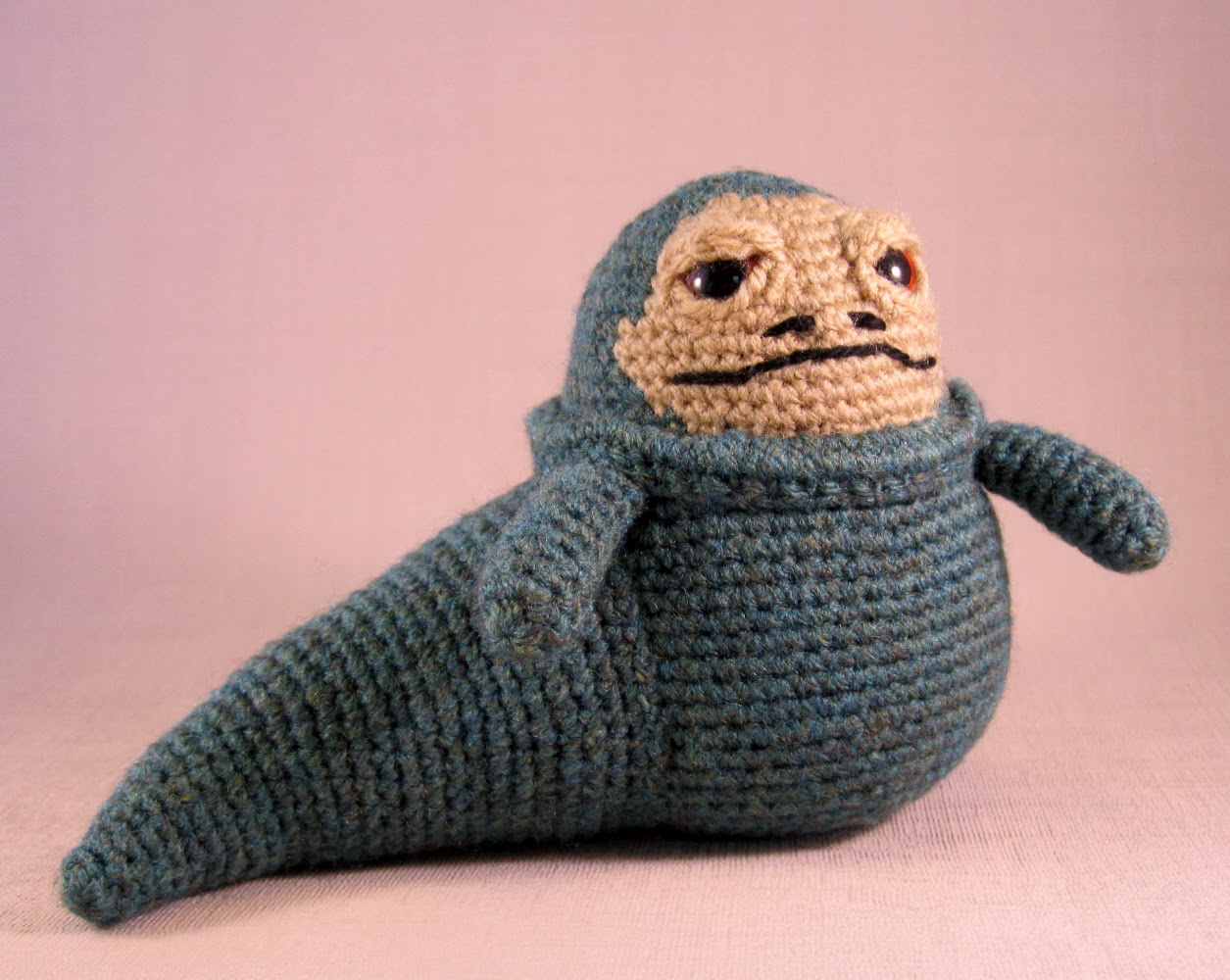 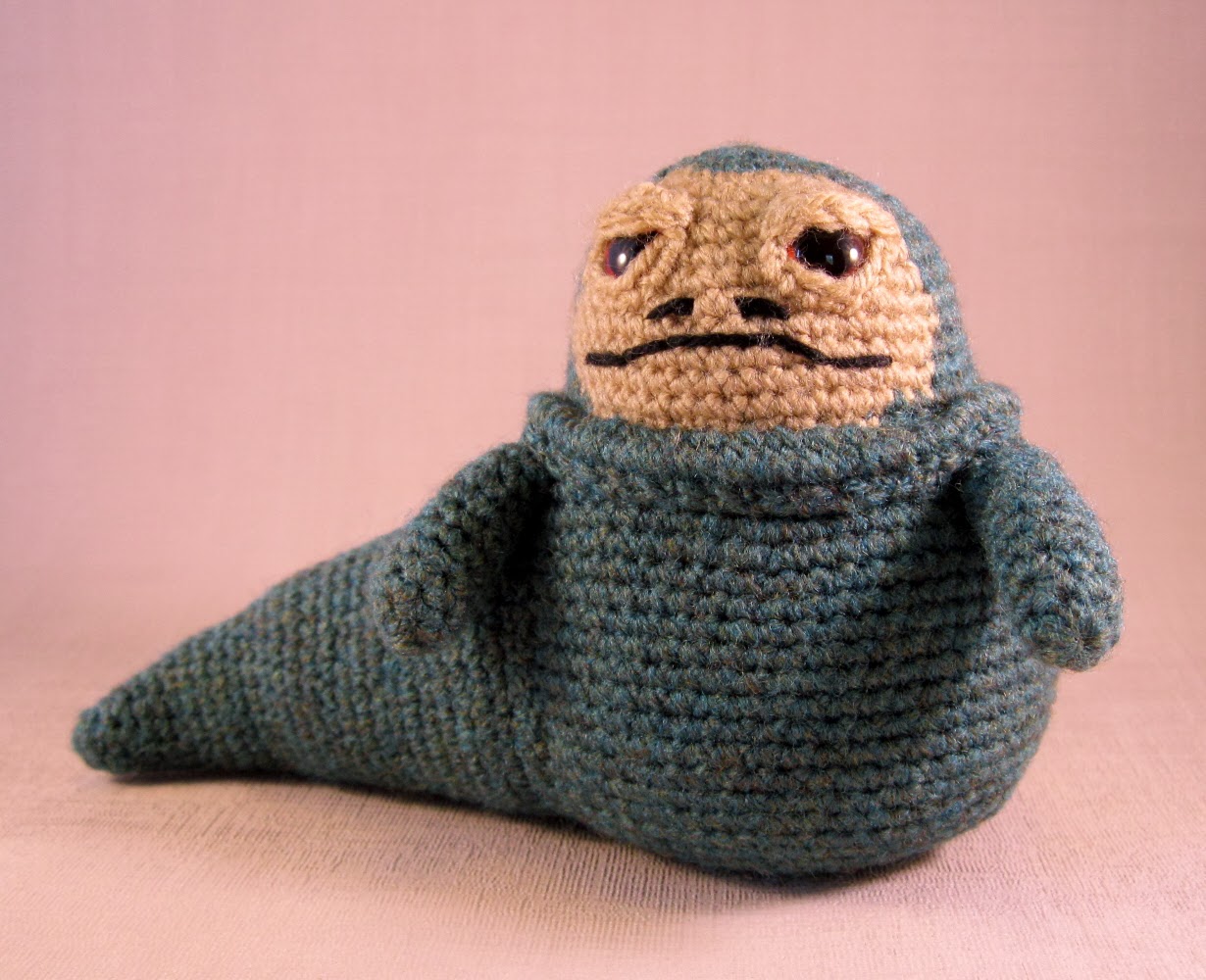 In the end I was very happy with the way he came out - he's a simple shape, but the colour change in his face gives a bit of detail, and giving him a proper expression with the eyelids and facial features keep his character. That said, I definitely find him oddly cute in this miniaturised form! 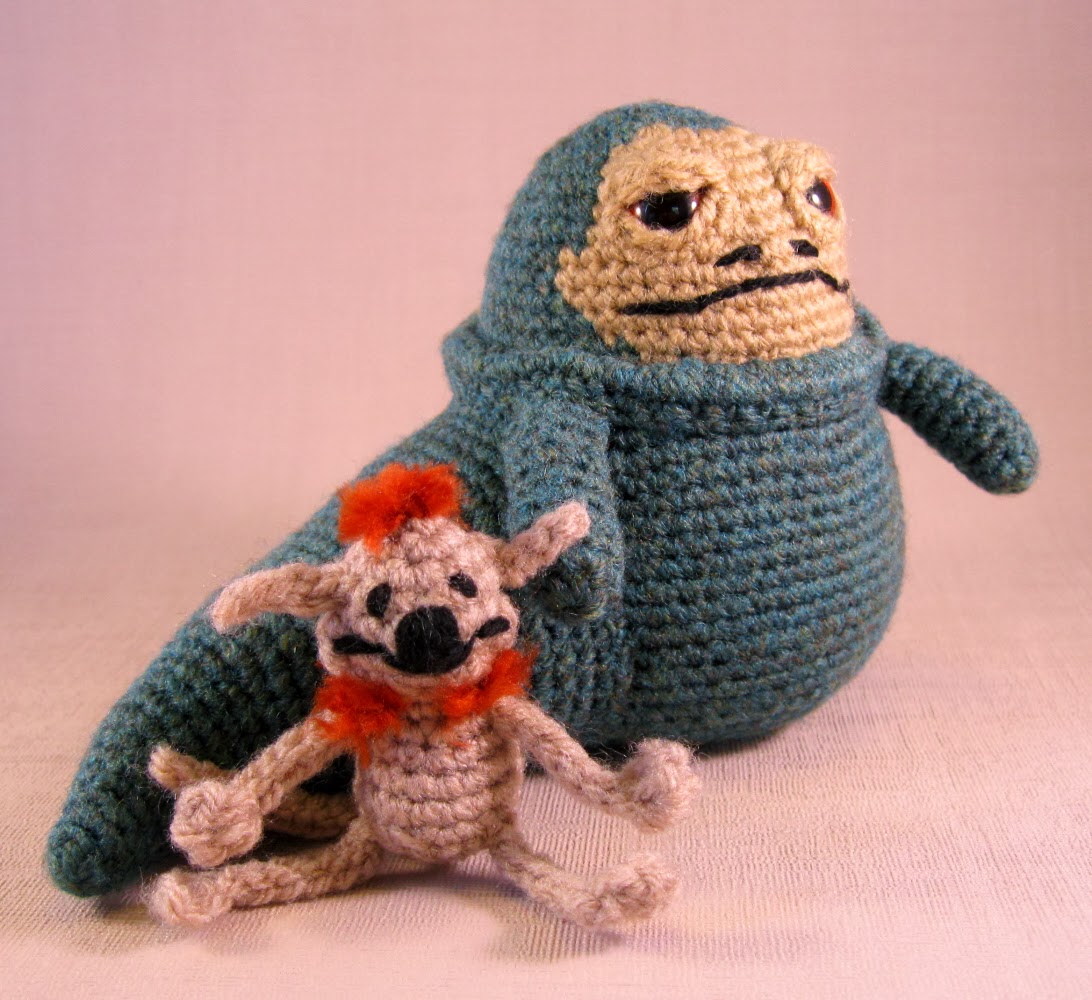 As I was making Jabba it seemed obvious to consider what other characters from Jabba's Palace it would be fun to make patterns for. I decided that Jabba needed his annoying little pet, Salacious Crumb. However, he's pretty small, and I wasn't sure I would be able to give him enough detail. As he's a sort of lizard/monkey I used similar techniques to those I used to make my Mini Monkeys and that approach seemed to work. He seemed too simple a pattern to sell on his own, so I included him with Jabba. 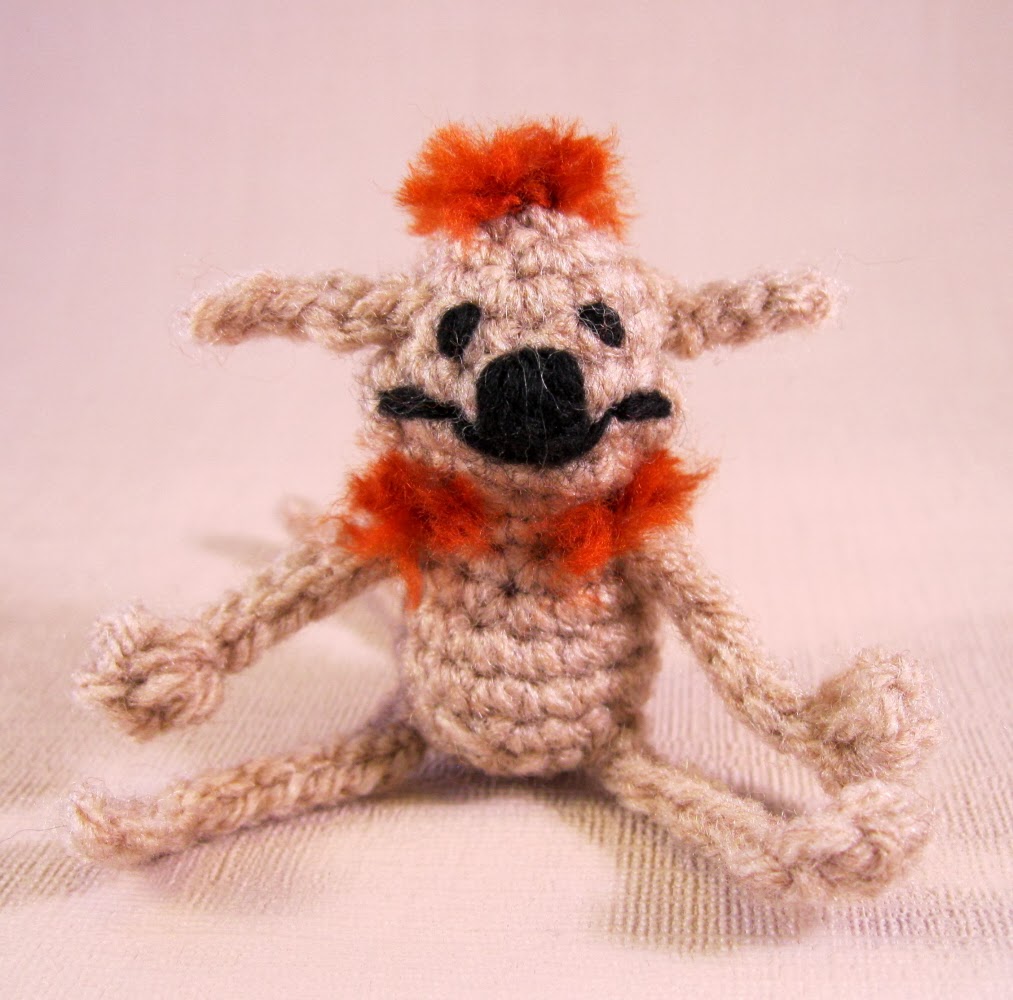 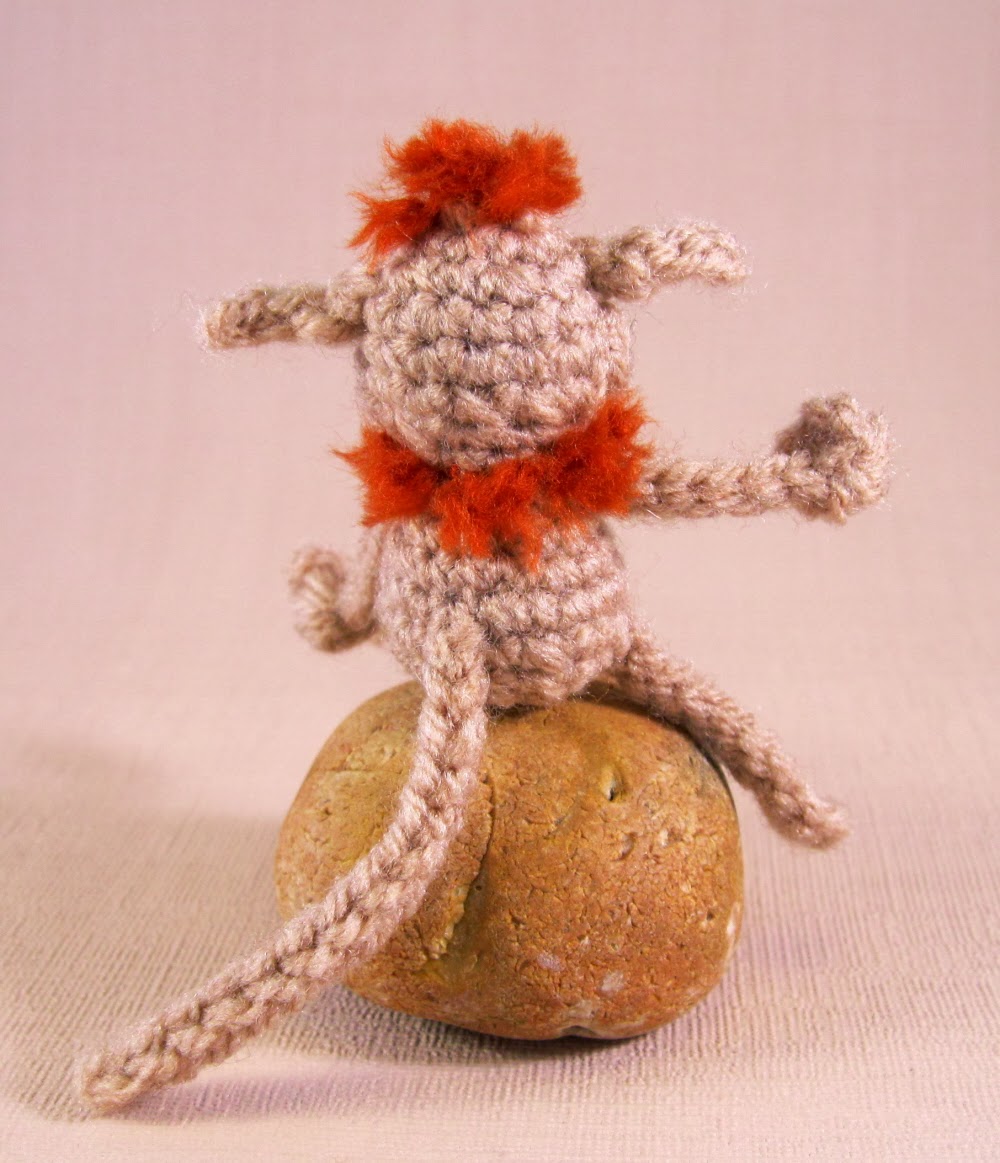 Leia in the slave bikini costume seemed another obvious choice from the Jabba's Palace sequence - I know my husband kept asking when I was going to make her! The original Princess Leia figure I made was quite small, shorter than all the other human characters, and I found it hard to fit in the details of the bikini costume, so I made her a bit taller (the same as Luke). I also decided to change the way I made her hair, and make it as a separate piece of crochet rather than as part of the head. 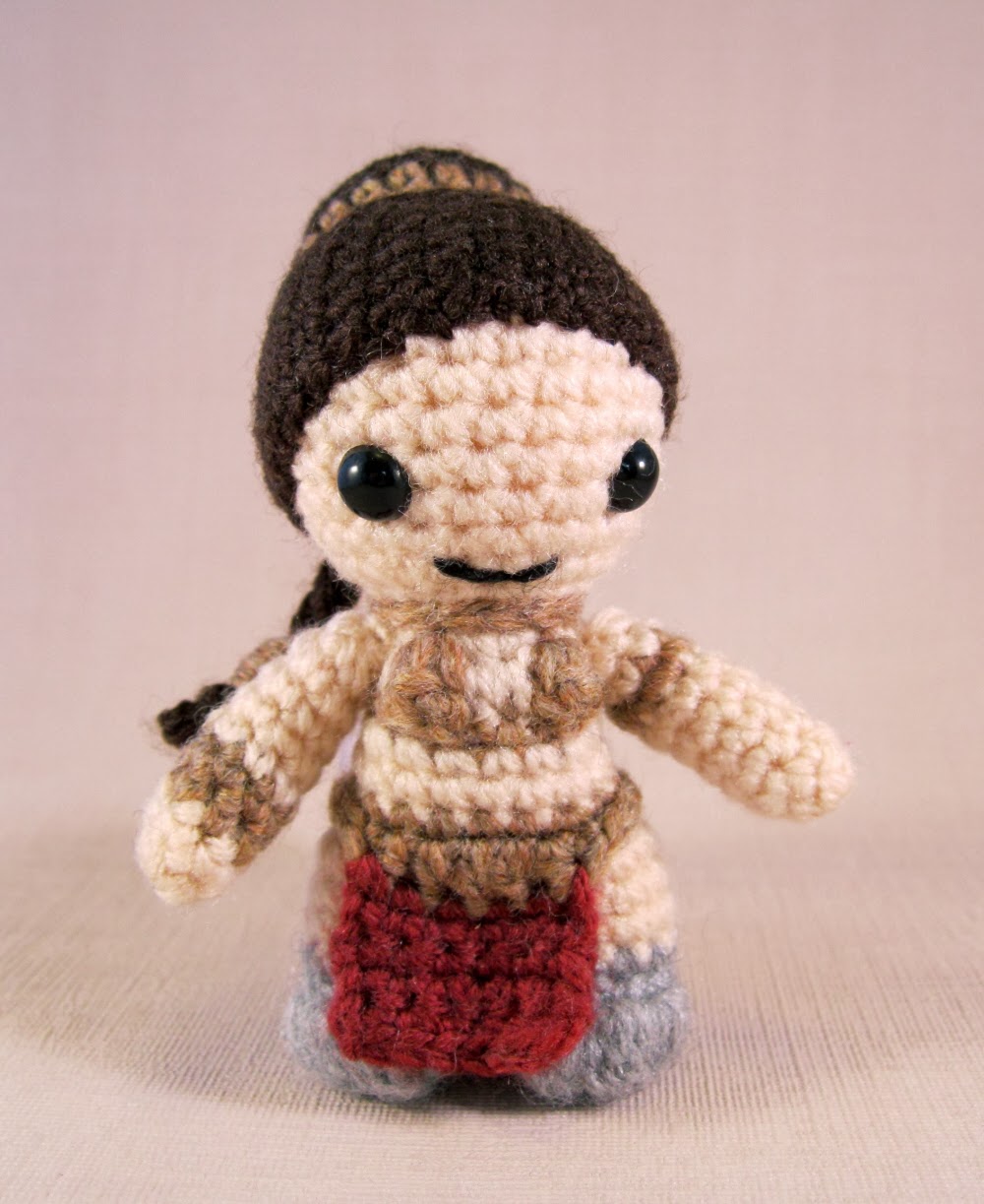 I spent a while deciding how to make her bikini. Looking at the original, the top consists of a metal framework with grey/green leather underneath. I couldn't get the detail in the small amount of stitches I had to work with, so I just tried to show the metal part. The metal is described as brass, but it looks more like bronze to me - I tried to use a yarn that was brass-coloured, but it seemed too pale against the skin, so I settled on a darker bronze-coloured yarn, which I think works. 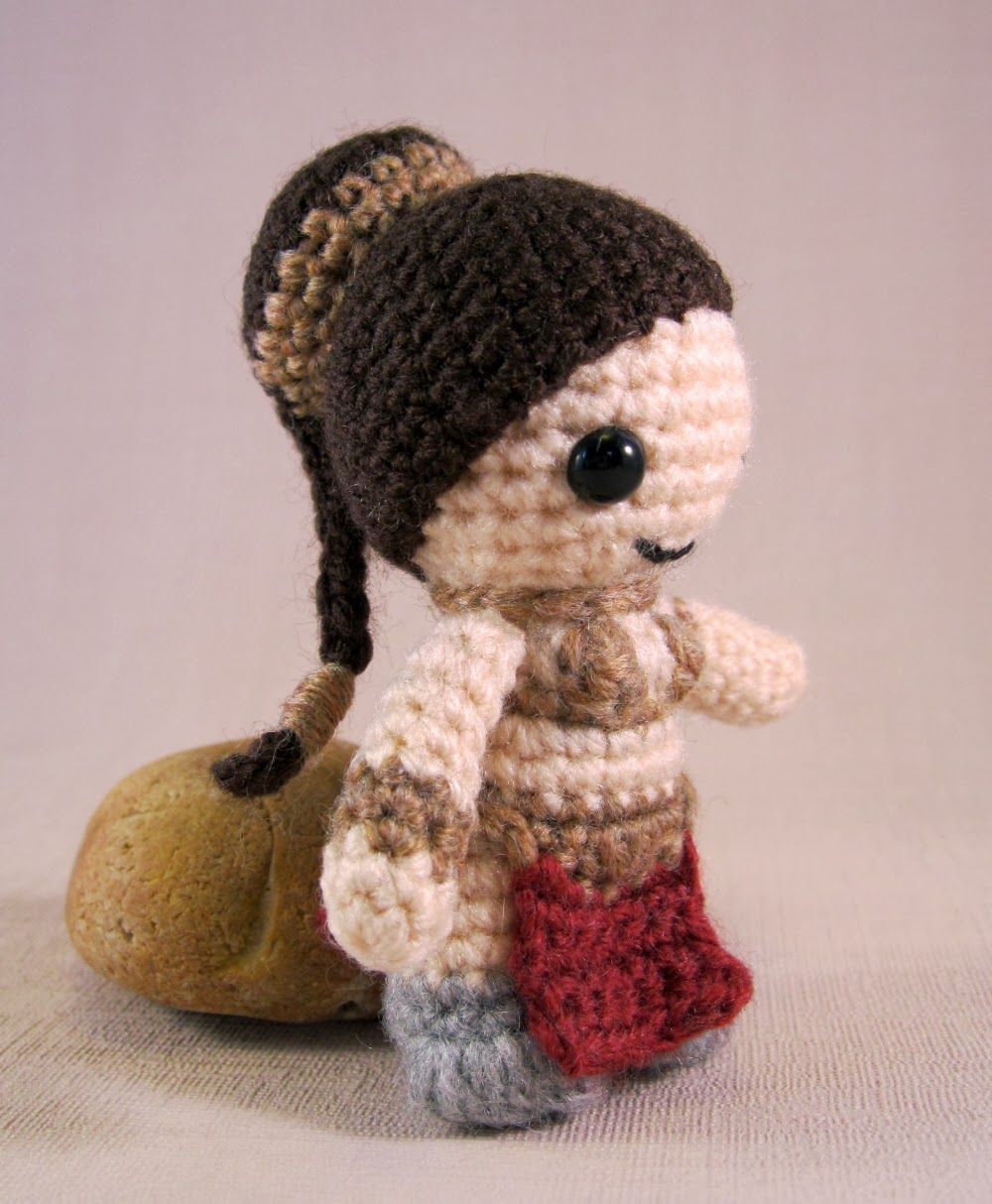 I was unsure as to whether the skimpy look of Slave Leia would work in a cute mini version, but I think she's turned out looking quite sassy, and ready to strangle Jabba if he causes any trouble!

The changes I made to the Slave Leia figure made me go back to the original Princess Leia figure in her white dress and tweak that pattern so that it was the same height and had hair made in the same way. If you bought the original Princess Leia pattern and you would like the updated version of that as shown here (Slave Leia is a different, separate pattern), just contact me on Etsy and let me know. 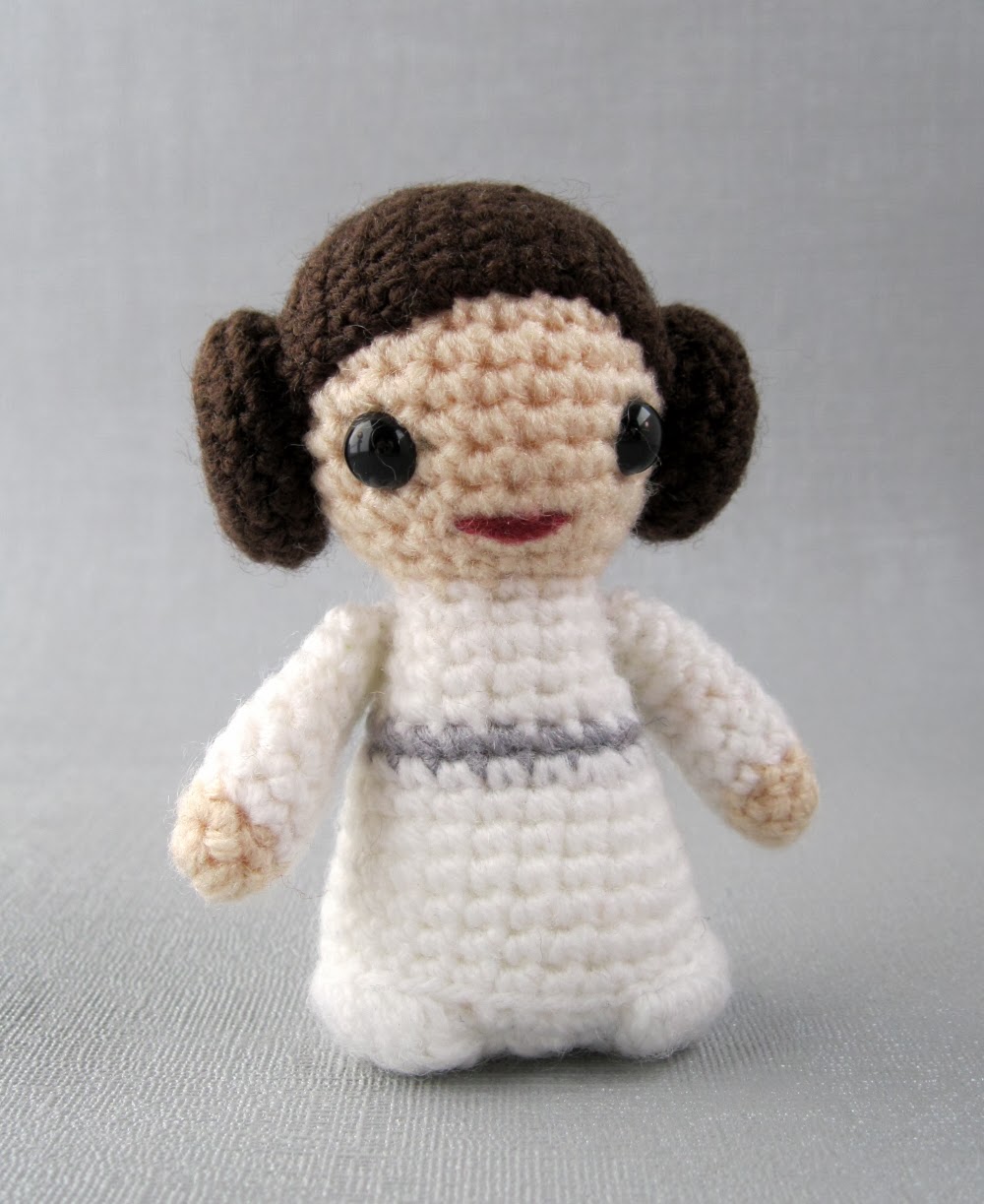 I'm now working on a Lando Calrissian pattern, then I 've got to decide which other characters I'd like to do; let me know any suggestions in the comments!


The Jabba and original Princess Leia patterns are no longer available for sale, as they are going to be included in a new Star Wars crochet book, due to be published Spring 2015. Keep an eye out in the future as I may release Salacious Crumb as a free pattern.
Posted by LucyRavenscar at 17:07 26 comments: