For quite a while now I've been wanting to design some patterns for various fantasy characters; peoples and creatures that appear in all sorts of folklore, books, films and games. I decided they needed to be a bit bigger than my Star Wars characters (about 3.5" tall) so they would have a bit more detail, but it's taken a bit of experimentation to come up with the right body shape. 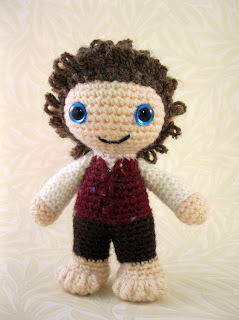 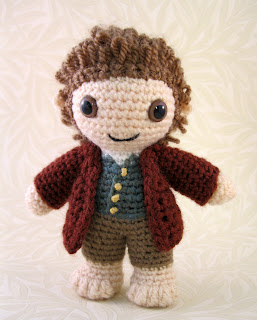 I made myself a little Frodo some time ago (see him in this post) and so the first pattern I started work on was for a Halfling. This is a generic name for the 'little folk' that appear in folklore, that often keep themselves hidden and can either be helpful or mischievous towards humans. In modern fantasy stories and games these little people often live alongside other fantasy races and have a variety of names and customs. Usually they are good-natured, not too war-like, and enjoy their food and home comforts. They are often portrayed with curly hair and wearing slightly more modern clothes - waistcoats and jackets rather than tunics - than other fantasy races. I think this comes from the fact that belief in hobs, brownies and similar creatures was still around relatively recently, so they are imagined in clothes from the 17th and 18th Century rather than the more medieval costumes favoured by Elves and Dwarfs. I've noticed that Halflings in games often appear as engineer or rogue-type characters; due to their size they're not obviously great warriors but they are quick and good with their hands so those sorts of professions suit them better. 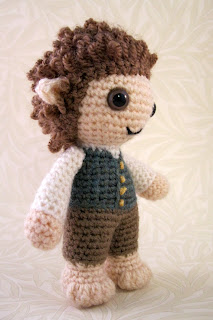 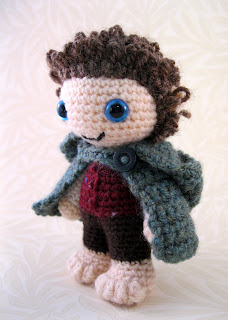 My Halfling pattern, available now in my Etsy shop contains all the information needed to make a male or female Halfling, about 5.5" tall, with a choice of clothing. You can make a male Halfling with or without a waistcoat, and with a separate jacket, hat or cloak. 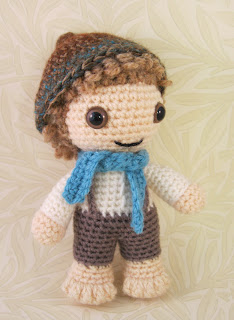 The female Halfling comes with the option of the traditional look with a bodice and skirt, or you can go for the engineer/steampunk look and make a Halfling with spiky hair and goggles. 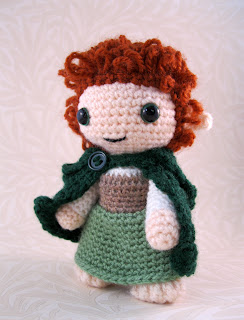 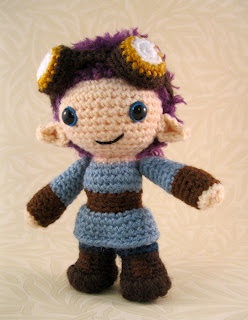 I'm now working on a pattern to make Elves, again with a selection of looks, and then I will probably work on a pattern for Dwarfs. After that I welcome any suggestions, though I'd like to do orcs/goblins, perhaps some classical creatures such as minotaurs and fauns, and some human warriors, maybe with a few historical ones (Roman, Viking) mixed in with the fantasy.
Posted by LucyRavenscar at 14:19 20 comments: