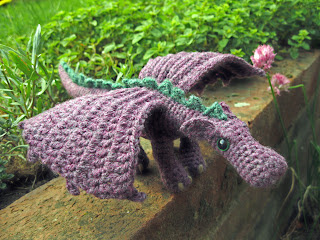 One of the first crochet patterns I wrote was for a dragon - my 'fierce but friendly really dragon'. I love dragons, and it's hard to find nice toys of them, so that was a real incentive to make one myself. Lots of people liked it and asked for the pattern, so eventually I wrote up my notes and put them on Craftster and Livejournal. The notes were quite rough, and though many people had no problem following them, some asked if I could write the pattern up properly. And, finally, I got round to it!

I had to make a dragon to check the pattern, and while I was doing that I tweaked a few bits - I used to crochet a lot more loosely, and I found some parts came up too small - and I used different stitches on the wings to make them much stiffer. 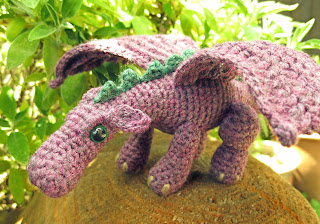 I won't post the pattern here as it's seven pages long, but it is available as a free download from Ravelry: Fierce Little Dragon free pattern 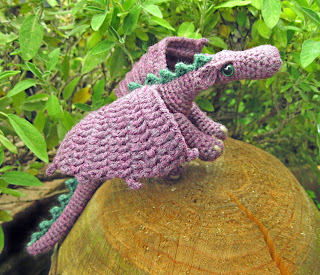 Edited to add: this pattern has now been translated into Spanish by Ana, over at her blog.

Edited to add 2: this pattern has now kindly been translated into French by FilACroche on Ravelry. You can download it here