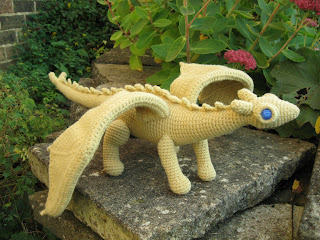 I made this last autumn for a 'Dragonriders of Pern' swap on Craftster. The series of books by Anne McCaffrey, which are about dragons and their riders, also feature miniature dragons, or firelizards, which make very intelligent pets. I tried to make my crochet version roughly life-size as they are described in the books, although I think she's quite young. Golden ones are the queens and consider themselves the most important! 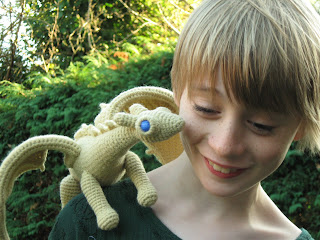 It took quite a long time to work out the right dimensions and shape while I was crocheting her, and I remade the wings about four times! I think this will be my next project to write up as a pattern, so I'll have to start making it again soon. I will do a few variations for the details on the head - shape of the eyes, ears or horns, and so on. Hopefully it won't take me too long. 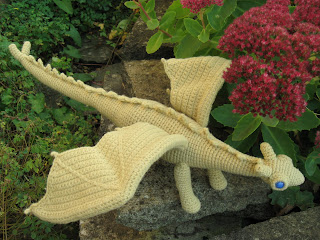 OMG!!! Its wonderful, the finest crochet dragon I have ever seen! I will definitely buy the pattern if you post it for sale! :)
Happy greetings/Ida

Beautiful! I saw your craftster post and was amazed! Can you make me one? ;) What was the name of that series?

Oh my gosh, I sincerly hope you write up a pattern! This is one of the best dragons I've seen and I know several people who would love to get one of these! :) You did such a great job!

Thanks guys! I really hope it won't take me too long to test and write up the pattern.

She really is beautiful!
I really love how you made her wings!

WOW I adore this dragon hope to see a pattern for sale soon.

Hi, just clicking through from Craftster. Your dragon is awesome and adorable! And I instantly thought it looked like a McCaffrey dragon before reading your description. :-)

I hope you don't take too long to test and publish the pattern too!

Thaks again! Alexis, I'm pleased you recognised it. The illustrations of the Pern books that I first read show very different dragons to the ones on the US editions, so I had to read them carefully to get a good idea of what they should look like. I kept her fairly simple anyway, I didn't give her toes/claws for example.

I've started to remake her prior to writing up the pattern - my notes aren't as detailed as I remembered and the wings are quite fiddly, so I'll do my best to hurry it up!

Have you created the pattern for this beauty yet?

Yes, I have written up the pattern now. It's available in my Etsy shop: http://www.etsy.com/listing/62870475/pattern-for-dragonet-amigurumi