When we rewatched Harry Potter and the Deathly Hallows part 1 recently, my 9 year-old son got very sad at the part when Dobby dies. He would not be comforted, and kept insisting that he hated JK Rowling for killing off his favourite house elf. In the end, I had to promise to crochet him his own little Dobby. 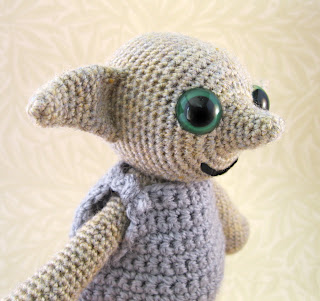 I used a pattern that I had worked out when I made this Grey Hobgoblin, I just didn't give him the furry hair or a tail. 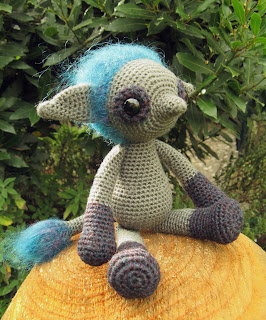 I had wanted to dress Dobby as he's described in the books after he becomes a free elf, with shorts, a tie, mis-matched socks and a tea cosy for a hat. However, my son (who hasn't read the books) wanted him to look the way he does in the films, so I crocheted a smock-like garment that's supposed to look like his pillowcase. I might have looked better made of fabric, but I always find it easier to make things out of yarn. Anyway, my son loved him, so that's all that counts! 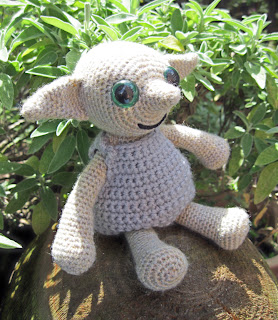 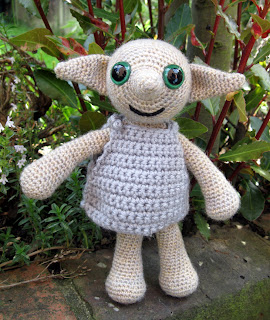 bahahaha I love him, Oh man when they killed him off I cried :'(
you did a Fantastic job on him..

What a great Mom. Dobby is adorable.

I love him. I wasn't happy when Dobby died either. It just did not seem fair! It looks like I'll have to make myself a Dobby doll so I'll feel better too~

Thanks for all the lovely comments! Dobby's death always gets me choked up too - even when I was just skim-reading the books to check his description before I made him! So, I was happy to make him for my son - maybe I'll steal Dobby when he isn't looking!

This is fantastic!! You are so talented

So cute! We just saw Dobby die in the film and am desperate to crochet him to comfort the kids. Do you sell this pattern?
Kind regards, Barbara

My 6 year old cried uncontrollably when Dobby died! I hastily promised him a Dobby doll for his upcoming birthday to soothe him. Little did I know they are all collector items! I would really, truly love to know how to make this or purchase one from you. His party is Oct. 8, and I would so love to surprise him with this! Could you possibly sell the pattern or a Dobby doll?

I'm pleased you like him! I am currently working on a pattern, but I want to come up with a few variations so you could use the same pattern to make different elf/goblin/imp creatures. Jessie, contact me privately through Etsy conversation (http://www.lucyravenscar.etsy.com) or Ravelry (http://www.ravelry.com/designers/lucy-ravenscar) and I'll see if I can make sure you get the pattern in time to make it for your son.

You are my crochet god. You seem to have made everything I want to crochet (maybe because I have a 6 year old son with similar taste to your own kids). I have made yoda and darth vader, a dragon (and his girlfriend), totoros in a variety of sizes and now a dobby! Hurry up with the pattern please!

I think Dobby is soooo cute!! My sister and I are a huge dobby fan. I would love to be able to crochet him!!

Dear Lucy, I need a copy of Dobby too. My neice wants one. Thanks, ~V (plentyofyarn@yahoo.com)

Dobby is my favorite character in the Harry Potter series and I was so upset when he died. I left the theater in tears. You did a fantastic job on this! I was wondering if you could also send me the pattern if you could. I would really appreciate it :)
(gpirate409@verizon.net)

Thanks for all your kind comments. As soon as the pattern is ready I'll post here and let you know.

Just found your little Dobby! You've got another fan! What an adorable, loveable little free elf! I'm going to have to learn how to crochet or find someone who will take an order! Looking forward to the pattern. Thanks so much!

Thank you! I have finally got the pattern up in my Etsy shop. You can find it here: http://www.etsy.com/listing/85800576/pattern-for-little-folk-amigurumi-elf

Absolutely awe inspiring. As soon as I came across this blog and saw your Etsy posting, I bought the pattern! :)

OMG!!! I LOVE Dobby!! Do you sell the pattern for him? I had always wished they SOLD a Dobby somewhere, but I never did hear of one. I would LOVE to make one if I could. I already have a Harry Potter, I crocheted, that people just LOVE every time they see him! I'm very proud of him, and think he would love Dobby for some company on my bookshelf! ~tina

Me again! Just found your pattern on Etsy, from another post! ~tina

Thanks, I'm pleased you like Dobby. As you found, my 'Little Folk' pattern has the details i used to make Dobby.

This is soooo cute!!

Your Dobby is sooo cute! I stumbled across him just over a week ago & I loved him so much that I started learning how to crochet the very next day so that I could make him one day & tonight I finished my very first amigurumi, a bunny! Now that I've had some practise I'm ready to make a Dobby. Thank you so much for inspiring me to take up a new hobby that I've discovered I really love! I look forward to trying more of your patterns in the future =)

Congratulations! I hope you're going to have lots of fun with your new hobby, I'm really pleased I could inspire you! I don't know if you've bought the Little Folk pattern yet - I've been on holiday and my shop has been shut, but it's open again now.

Hello! I came across this pattern just love it! I am the editor of AllFreeCrochet.com and would love to feature your tutorial on my site with full credit to you. I know my readers would love it as well, and in return would generate some nice traffic to your site. If you agree and would like us to feature your project, our readers will simply click the link to your blog to get your full tutorial. It's really that simple. Please let me know if this would be ok. I look forward to hearing from you!
Jenny
jbenoit@primecp.com

This is phenomenal. My friend's grandmother recently passed away, and she adores Dobby. Is there anyway you might share this pattern? I would really appreciate it! If not, are there any tips you might have for someone who's relatively new to amigurrumi and would want to try and create her own Dobby? Thank you!

If you want, feel free to email me: lindsey.s.frantz@gmail.com. Otherwise, I'll keep checking back here!

Hi Lindsey, I now have a pattern for sale in my Etsy shop, the Little Folk pattern, that includes all the details to make an elf like Dobby: https://www.etsy.com/listing/85800576/pdf-of-little-folk-amigurumi-pattern-elf

OMG! I have been looking for something JUST like this for 3+ years. Would you consider selling me one?? My email is alexisponsig@att.net thanks!!!

Hi Mia, I'm afraid I don't make them to sell, but I do allow other people to make the toys from my patterns, so you might find some if you searched on Etsy.

hello, congratulations for your works, there are very beautiful. Is it possible to have the pattern of this elf please? I love crocheting too, follow me at My Crochet Mania
Kiss, Grazia

Thanks Grazia! I sell the pattern to make this (and other) elves, fairies and imps in my Etsy shop: https://www.etsy.com/listing/85800576/pdf-of-little-folk-amigurumi-pattern-elf

I would buy a Doby from you if you sold them.I love Doby...is there anyway I can purchase this adorable doll...I can't crochet at all :(

I'm pleased you like my Dobby, but I'm afraid I just write patterns, I don't make the toys to sell.

OMG - How do I get a pattern? My granddaughters love Dobby. smmelcher@comcast.net

Hi Susan, I think you found the pattern and ordered it, but just in case, here's the link: https://www.etsy.com/uk/listing/85800576/pdf-of-little-folk-amigurumi-pattern-elf?

Hey!
Is there anyway I can get the pattern?

The pattern, that includes details on how to make characters like these, is on sale here: https://www.etsy.com/uk/listing/85800576/little-folk-amigurumi-pattern-pdf-elf?ref=shop_home_active_2

Hello! I was wondering what eyes you used for Dobby? Also where did you purchase them? Thanks!!

I used 16mm safety eyes, from e-crafts (http://www.e-crafts.co.uk/soft_toy.htm). Here's a list of safety eye suppliers elsewhere in the world: www.planetjune.com/eyesources

Tha k you! One more question aboUT how much yarn did you use? I was trying to price this out prior to purchasing your pattern.

Each figure uses approximately 60g of yarn, the clothes would be about 10g of yarn. Most of the information you need is written in the details on the Etsy listing: https://www.etsy.com/uk/listing/85800576/little-folk-amigurumi-pattern-pdf-elf?ref=shop_home_active_2

Hello, your Dobby is so amazing, I would like to make one little for my sister as gift, could you send me your pattern please? Thank you very much :)

Thanks! The pattern to make Dobby (as part of the Little Folk pattern) is available in my Etsy shop: https://www.etsy.com/uk/listing/85800576/little-folk-amigurumi-pattern-pdf-elf