When it was my sister-in-law's birthday recently I couldn't decide what to get her for a present. I had a look around my local shops, but I just couldn't see anything that seemed right. So I decided to make her an amigurumi version of a character from one of her favourite shows, Firefly. I went for the captain, Mal Reynolds, since I love Nathan Fillion too, and I thought he would be fun to create. 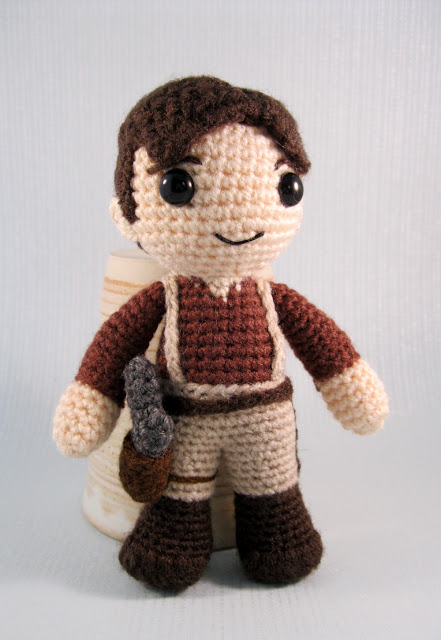 I based the figure on my Elf pattern, tweaking the proportions a bit to make it a tiny bit shorter (and I think cuter), and had him wearing one of his regular outfits, brown shirt and cream trousers with braces (suspenders). Of course, I had to give him his famous brown coat (Firefly fans are known as Browncoats), and I even made a tiny gun and holster to go on his belt. It was a bit of a challenge to get his hair right, but I think I succeeded in the end. 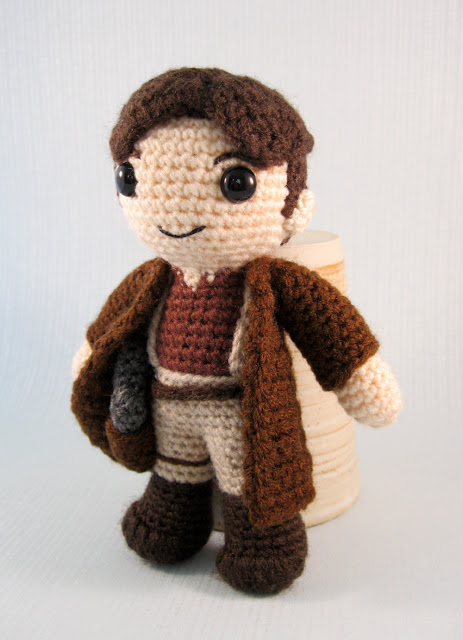 I was quite sad to send him away, though hopefully he was a successful present. I think I'll have to make one for myself now though!
Posted by LucyRavenscar at 14:14

Hope it leads to a new pattern set!

Thank you for sharing

I love Firefly! He looks great. If you ever make this pattern available I would buy it in a heartbeat.

I hope you write up the pattern and sell him - he's fantastic!

I love Firefly and this Mal is amazing. PLEASE make the pattern available! I would buy it immediately. Just perfect!

I would love to buy this pattern from you. I'm hoping it will be available on your etsy shop soon. :)

I love this! I too would buy this pattern and would love to see a set. Just knowing one crochet Mal exists, though, is enough to make me very happy.

Thanks everyone! I am thinking about doing a pattern, just trying to finish a few other things first.

What a wonderful gift. He is really handsome!