Big news! I have a new book coming out in October, Harry Potter Crochet. It's produced by the same people who did the previous two Star Wars books and in the same format, so it comes as a kit. There is a book with patterns to make Harry, Ron, Hermione in their school uniforms, with removable robes and scarves; Ginny in her Quidditch uniform and with her broom; Dumbledore, Snape and McGonagall, along with the Sorting Hat; Hagrid, Dobby, Norbert the baby dragon and, of course, Hedwig. To complete the line-up we have He Who Must Not Be Named, Voldemort himself. 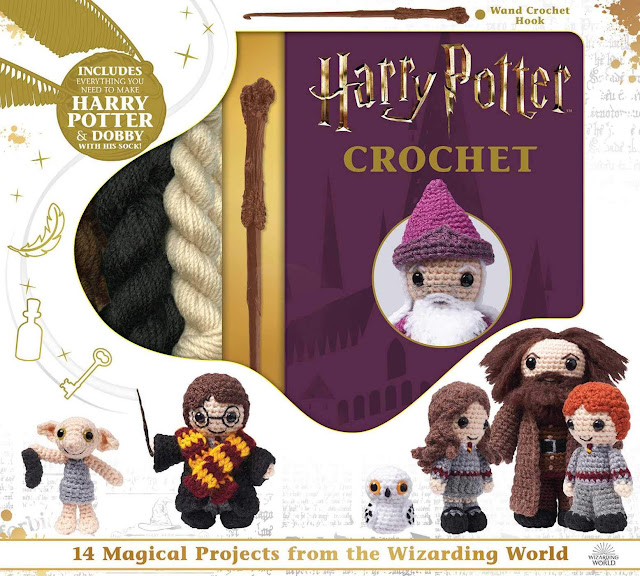 The kit includes everything you need to make Harry and Dobby - yarn, eyes and, best of all, a hook shaped like Harry's wand! 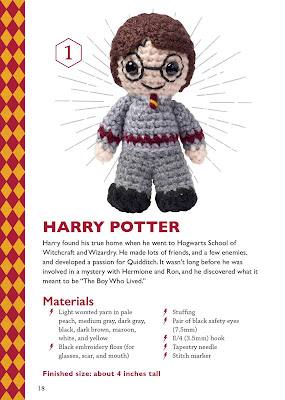 I'm a massive Harry Potter fan so I was really excited to be asked to work on this book. Because of the range of character sizes I decided to make them a bit differently to the Star Wars characters. The children are about the same size as most of the SW figures, but the adults are larger, with Hagrid obviously being the largest figure. That allowed me to make Dobby and Hedwig pretty much in scale with Harry, though it would have been impossible to do that with Norbert, so he's closer to being life-sized. 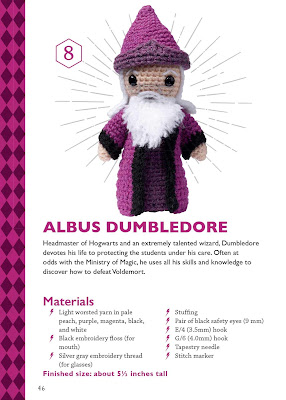 I finished designing the patterns and making all the figures back in January, so I've been waiting for a while to even be able to talk about this. Hopefully it won't seem too long to wait for it to come out in October. It's coming out in the US and you find it on Amazon, though it should also be available in other bookshops and craft stores. It's also available on Amazon UK as an import, so that will be the version with US crochet terms.
Posted by LucyRavenscar at 15:33

Wow! So very, very cute! I'm putting it on my wish list.

Are you going to provide a list of the yarns you used for the samples just as you did for the Star Wars characters?

Yes, I will try to put up the list of yarns used when the kit comes out.

I can't articulate how glad I am to see this, especially as it's released in my birth month. There's a special beauty to the structure of your patterns, which makes them both comforting and exciting beyond the item being produced. I take part in a critter-crafting thing on Ravelry 3 months each year, and always head straight to your patterns

I received your Harry Potter Crochet Kit today in the mail (AZ). I can hardly wait to start.!! They are all so cute. Even Voldemort....bless his wicked teeny, tiny heart!! I have made your Star Wars figures so many times!! I made the first set and gave it to my at the time 42 y.o son. And my 37 y.o daughter looks at me with a pout on her face and says, What about me? When your Star Wars II book came out, I made those for her!! Thanks so much. You are so creative!

Craftyclairy and Joan, thank you for your lovely comments!

Love the book, but when making Hermione, specifically her hair, the directions say "2x 2dc bob in each..." And I can't figure out what bob means. Thanks!

Bob means bobble, unfortunately the details of how to make bobble stitches were missed out from the book, so here you go:

I believe there is an error in the pattern instructions that I want verified. For Harry Potter's hair, I believe row 12 should end in a "turn." It doesn't make sense to end with a ch 1 and continue as it would make the hair not look correct. Please verify that row 12 ends in a turn for Harry's hair.

Yes, you're right, it should say 'turn' at the end of row 12. Thanks for spotting that!

Sorry to be so slow to reply, I missed your comment. Do you know how to make a popcorn stitch? If not, you work a certain number of double crochet stitches into one stitch, then take your hook out of the working loop. You then put your hook through the top of the first dc, then through the working loop, and pull that through, making a big, bumpy stitch.

To do the pointed popcorn, you work 1 dc, then do 2 chain stitches. Work 2 more dc into the same stitch as the first one, then make the popcorn as described above. The extra 2 ch give a pointed end to the popcorn, which makes it perfect for the horns on Norbert's head.

I received this kit as a gift and I just love it. I am working on Norbert right now and I am stuck on the front leg. What does, Sl st between back loop of each sc and the loops formed along the bottom to join edges together, mean?
Thank you in advance.

Hi April,
I can't add photos to my reply here, so if you could contact me via messages on my Etsy shop (https://www.etsy.com/shop/lucyravenscar), I can show you images to explain what to do more easily.

I have tried to send you a message on your Etsy page but it keeps telling me that sending failed =(
Could you maybe send me an email
april.sexton2@gmail.com

Thank you for all your help

I'm making Harry Potter from your kit. I can't figure out how to do the legs.

Can you give me a bit more detail about where you're getting stuck?