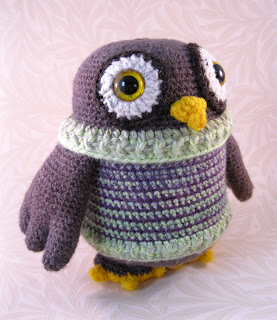 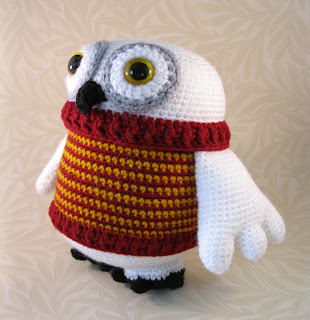 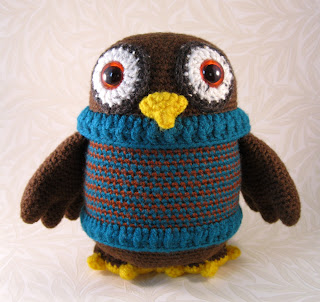 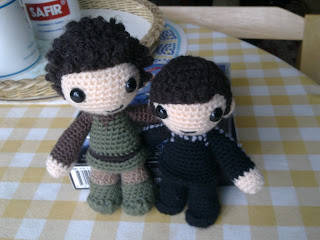 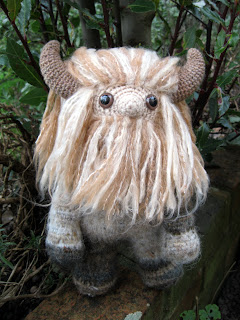 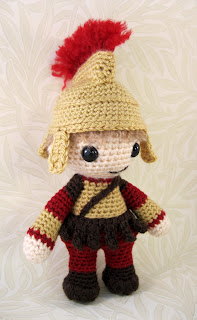 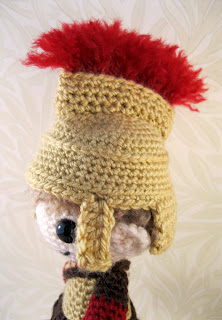 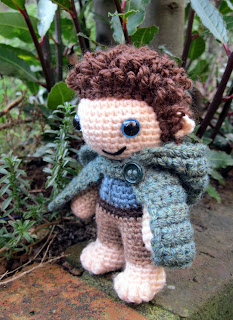 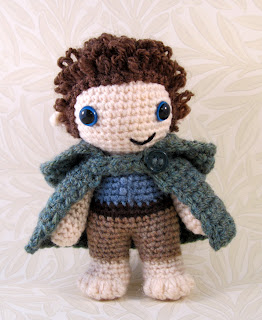 I've also been busy making various fun little toys for our school's Christmas bazaar, so I'll start writing up the patterns for those and posting them here. And I've been working on my Totoro patterns, improving them and coming up with a version of the grey totoro as well as smaller versions of the blue and white ones. I'll be posting the completed patterns for those very soon.﻿
Posted by LucyRavenscar at 18:16

I don't know the tv show Blake's 7 but i very love your Og!

Wish you a good weekend.

Thank you! He's in a rather bad episode, but I like the design of the creature, and he makes a good toy. He was very popular at the convention - he was cuddled a lot!

Hello,
I'm new to the blogging world but have been sewing since childhood, knitting since teens and can just about wield a crochet hook. I love your crochet creatures and as a massive dobby fan my 3rd daughter (D3) is setting her sights on one. You're amazing at what you do. Well done

Thank you guys! I hope you have fun with my patterns - let me know how you do with Dobby.

Wow!!
I like your amigurumi a lot!!! They're fantastic!!!
Greetings!
Laura

I was so excited to see a new post from you. I cannot wait to try my hand at the owl :D

Thank you! I hope you enjoy making an owl as much as I did.

Is there any way you could put your Frodo pattern up on Etsy? I would LOVE to make him!!!

It's on my list Melanie, I just want to develop the pattern a bit more.

Really pleased to hear Frodo is on your list Lucy. I'm new to crochet but have an aim to make some Star Wars figures for Christmas pressies...Dobby is also on my wish list and Frodo will be when he's ready for the public!!
Keep up the great work... Love all your characters
Ali

I just stumbled on your blog and I am just DYING to get my hands on the pattern for these guys!! I would love the basic pattern. I know so many characters from books and movies I'd love to develop (and share of course). I love the style of these guys and would really like to make the entire cast of characters from LotR in this style! Your Frodo is too awesome!

Also, as a fellow Whovian, I'd try to work out making all 11 of the doctors!

Thanks Nick! I seem to working on lots of different things at the moment, but I have been developing the pattern, and have made an elf. I just need to make a dwarf now (it helps to work on them together to get the different heights right), and then I'll put the patterns out.

Hi Lucy!
I was wondering, do you have the Frodo pattern for sale yet? I reeeeeally want to buy it!
Thanks!

I've replied to you in more detail on Etsy, but I hope it will be ready soon.

See this latest post (http://lucyravenscar.blogspot.co.uk/2013/05/fantasy-amigurumi-halfling.html) for details of my pattern to make a Halfling.