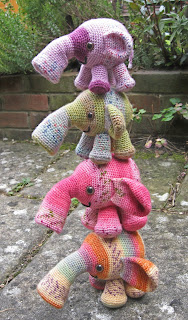 Tooterphants are friendly little creatures, similar in shape to elephants, if not in size. However, they have wide trumpet-shaped trunks that they use to make tooting noises to communicate with one another. They also use their trunks, or tooters, to suck up their food - should you want to attract one, leave a trail of interesting treats such as raisins and they may follow it. They live in groups, and enjoy acrobatic games where they climb on top of each other to form a tower of Tooterphants - luckily their rounded shape makes them bouncy, so they don't mind when they fall down. 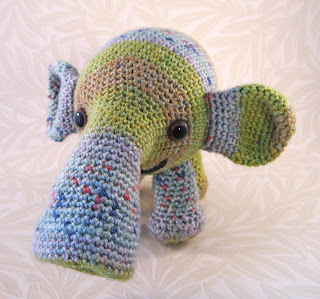 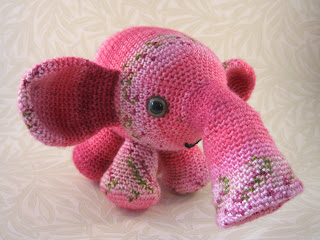 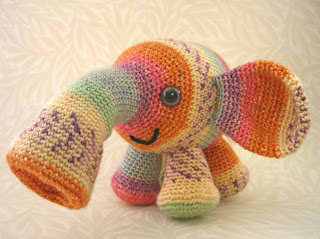 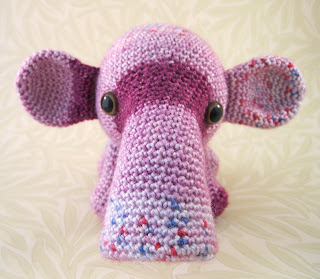 These cute creatures are based on patterns I'd made in the past - several years ago I made an Eater of Socks for a swap, based on the description of a creature that appears briefly in Terry Pratchett's Hogfather. Given that it eats odd socks, I gave it a wide trunk/snout to suck them up, and made its legs striped like socks to act as camouflage. Then, a few years later, I made a Sky Elephant, using the previous pattern as a base, but making it bigger. The Sky Elephant was made from blue and white variegated yarn and had fluffly cloud-like ears. 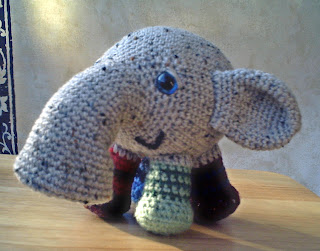 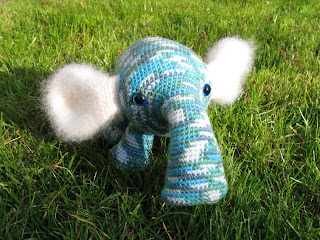 So, I went back and revisited these patterns. I had some nice self-striping yarn that I wanted to try out (King Cole Splash DK), and I thought these would be the perfect patterns to use to show off all the colours nicely. I made a few minor changes, but I liked the patterns pretty much as they were. They have a nice compact shape and sweet faces, and I think they would make good toys for young children because they have a lot of bits to grab hold of. The pattern, which has all the details to make both sizes, is now available in my Etsy shop. 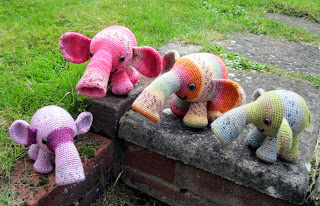 Love these, so cute. They will have to be put on my to do wish list ;-)

They are so cute!

As everyone has already said - seriously cute! Well done.

Thank you very much. I really appreciate the feedback.

Hi! Today I posted about your corks. It was successful! Happy to find your blog!
Thanks!

Thank you, and gracias PAQUI!

These darling creatures are on my Want,Need,HaveToHave list too!

Your creatures are simply wonderful!

Lucy, I am a writing teacher and have just written a blog post in which I mention Terry Pratchett's eater of socks. I was looking for an image and I found Claudius, who is so adorable! This is just to let you know I have used his picture and linked back to it and your Etsy shop and this blog clearly on the post. It won't be released until March 30th, but then it will be here: http://cateartios.wordpress.com/2012/03/13/autopilot/ If you have any concerns, don't hesitate to contact me. I hope it brings you business. Your work is gorgeous! Thank you for bringing this little guy alive.

No problem, I'm glad you liked him!